Caring for Your Hair and Scalp on Holiday 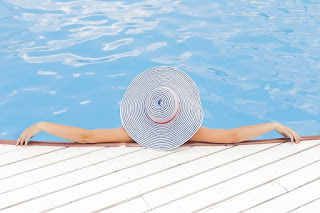 When we leave the London rat race behind and head off on holiday, most of us are hoping to enjoy plenty of sunshine. We're often also looking forward to swimming in the sea or a pool. It's well-known that the sun can take a toll on our skin – but sometimes people forget to think about the effects of sun and water on hair and the scalp. There's a need to take particular care if you are experiencing male hair loss, as this means your scalp is more exposed and can become burnt or irritated.

Here are some top tips to ensure that, while you're relaxing, your hair isn't being unnecessary stressed by the heat and the water. If you are becoming concerned over thinning hair, remember The London Centre of Trichology is here to help and can provide expert hair loss diagnosis and advice.

Hair Loss Diagnosis –  Follow the link to find out more about  programmes for hair and scalp conditions.

Sun Risks – and How to Combat Them
Effective protection against the sun on holiday for your hair and scalp is vital. The sun and heat can make hair brittle and possibly exacerbate male hair loss, or could also make it greasy. You also risk increasing chances of skin cancer and causing undue pain and peeling to your scalp.

The most effective way of protecting the scalp and hair against the sun and heat is by simply wearing a hat. This isn't just for the beach, but also while sightseeing on a city break, for example, as the risks exist everywhere! Don't worry, since with the huge variety in styles of hat available you will be sure to find something that suits you. Hats are very fashionable and worn for their stylishness, as well as to give protection.

If you have thinning hair, when not wearing a hat, remember to apply sunscreen to your scalp to avoid burning. One option is a clear high factor spray, which can be targeted directly onto the scalp to provide maximum protection.

Protecting Hair in the Water
A large number of holiday-goers this year will be spending time swimming. However, you may not know that the chlorine found in all pools can make hair dry and cause split ends. So how can you prevent these issues while still being able to enjoy time in the water?

One of the most simple and effective solutions is to not allow your hair to come into contact with chlorine, by wearing a swimming cap. And there's no need to worry, since swimming caps have come on leaps and bounds in recent years, providing much more comfort than in the past

Another protective measure is to rinse your hair in clear water by going under the shower just before getting into the pool. This stops hair from absorbing as much chlorine as you would by getting into the pool with dry hair. Jump back into that shower straight after swimming to wash your hair, and it's equally important to do this after swimming in the sea, as the salt can dry out your hair and make it sticky.

There's also a whole host of products on the market designed to combat the effects of chlorine, such as shampoos formulated for swimming or conditioners to apply before you go in. So keep an eye out for those before setting off on holiday.

Easy Care Styles
Nobody wants to spend a lot of time looking after their hair on holiday, so it's a good idea to keep it simple. There are typically two methods of approaching the holiday hair decision, 'Let it Grow' or 'Cut it Short'.

Typically most men would have their hair cut short just before a holiday in order to minimise the amount of styling required while away, and why not? The hairstyle reduces unsightly tan lines and means less time maintaining and more time in the sun. However there is a second option with a slightly more 'messy look', allowing the hair to grow longer while away. This can  be a refreshing change and give a cool laid back look.

Don't forget your favourite hair products while you are away, since it may be hard to find them while travelling abroad. Most cosmetics products now come in a smaller, more handy size for taking away with you.

If you are concerned about thinning hair, there's no need to feel embarrassed or worry about it on your own. The London Centre of Trichology is here to help and offers expert services  for both female and male hair loss, including male pattern balding and alopecia diagnosis.

Male Hair Loss London – Follow the link to find out how you can book your free initial consultation with one of our experts.

Posted by London Centre Trichology at 05:45

Celebrities Speak Out to Raise Awareness of Hair Loss

Hair loss has in the past often proved a taboo subject for both women and men. Women in London and across the UK suffering from female hair loss often feel ashamed and isolated. Men can also feel upset and embarrassed about the fact that they are worried about hair loss, since it's something they are expected to take in their stride.

However, the problem is becoming more widely discussed, with famous names leading from the front in raising awareness. Both female and male celebrities have recently been speaking out in public about their experiences. Among those who have spoken frankly are breakfast TV presenter Ranvir Singh and finalist on TV's X Factor Christopher Maloney..

If you, like many others, are concerned about thinning hair, it's best to get advice instead of worrying alone in silence. Contact the London Centre of Trichology to find out just how quick and easy treatment could be.

Alopecia Consultation London – Seek advice from one of our experts, who can arrange a free initial consultation for you.

TV Presenter's Battle with Alopecia
ITV's Good Morning Britain presenter Ranvir Singh recently told how she has been battling alopecia since the age of eight. She said that after her father passed away her hair fell out due to the emotional turmoil, and after that it had never fully grown back. Alopecia affects men and women alike and can vary in appearance from tiny bald patches to total loss of hair.

Ranvir admitted she has often felt anxious about the condition, but said people were often surprised to hear about her problem. She explained how she is able to make her hair look its best through expert hairdressing techniques. The presenter avoids styles such as tying her hair back, because this would reveal small patches of bare skin on her scalp. While Ranvir hasn't always found it easy to cope with the condition, she has lived with it over most of her life and says it now isn't a major worry.

Ranvir's experience gives hope to other women who have found themselves feeling embarrassed and being worried about female hair loss. Alopecia can be caused because of a whole host of reasons, including stress, as in Ranvir's case, as well as genetic factors. An alopecia consultation is the first step on the road to treatment.

X Factor Finalist's Stress-Related Hair Loss
In 2012 Christopher Maloney finished third on the X Factor, but he believes stress from the show caused clumps of his hair to fall out during his time on the show. This turned into a vicious circle for the singer from Liverpool, as the strain caused by losing his hair made the hair loss itself become even worse.

The singer told how his confidence was hit when he was targeted by mocking comments from “trolls” on the web. He said that, by looking back at shows from the series, he could see how his hairline had altered over the period that he was competing. After appearing on the series, he underwent treatment for depression. Once he had recovered, he decided to undergo three hair transplants, as well as other cosmetic surgery treatments.

Christopher says he now feels “much more confident” and that he has been given “a new lease of life”. His career is going well and he is planning a tour. The singer has spoken out about his experiences because he wants to raise awareness and ensure that future contestants on TV talent shows have more support if they suffer similar problems.

His experiences show how people can experience stress related hair loss if they are put under pressure for too long. Usually this is a temporary problem and hair grows back, but, if you are concerned about hair loss, it's best to seek expert help and get a diagnosis as early as possible, since early treatment is more effective.

Famous Names Raising Awareness
Many other high profile names have also in recent years spoken out about their personal experiences of losing their hair, including MP Nadine Dorries, golfer Tiger Woods, actress Geena Davis and TV presenter Oprah Winfrey. In addition to this, nine women recently spoke out in a special feature for Vogue magazine about their experience of hair loss, in the aim to raise awareness.

Some celebrities have decided to live with their hair loss, while others have sought treatments. Either way, their openness about their experiences has certainly helped other people in similar situations by breaking through the taboo. They have demonstrated that there is no longer any need to suffer in silence.

As with these celebrities, it's up to each individual how they react to male or female hair loss, but if you feel unhappy or uncomfortable, you can get in touch with London Centre of Trichology for expert hair loss diagnosis and help.

Female Hair Loss Treatment London –  Follow the link for more information on Alopecia treatments and to book a free initial consultation with an expert at the London Centre of Trichology.

Posted by London Centre Trichology at 05:36

About London Centre of Trichology

London Centre Trichology
Worried About hair loss? The London Centre of Trichology has a reputation of being at the forefront when it comes to research and development - finding natural solutions to solve your hair loss and scalp problems.